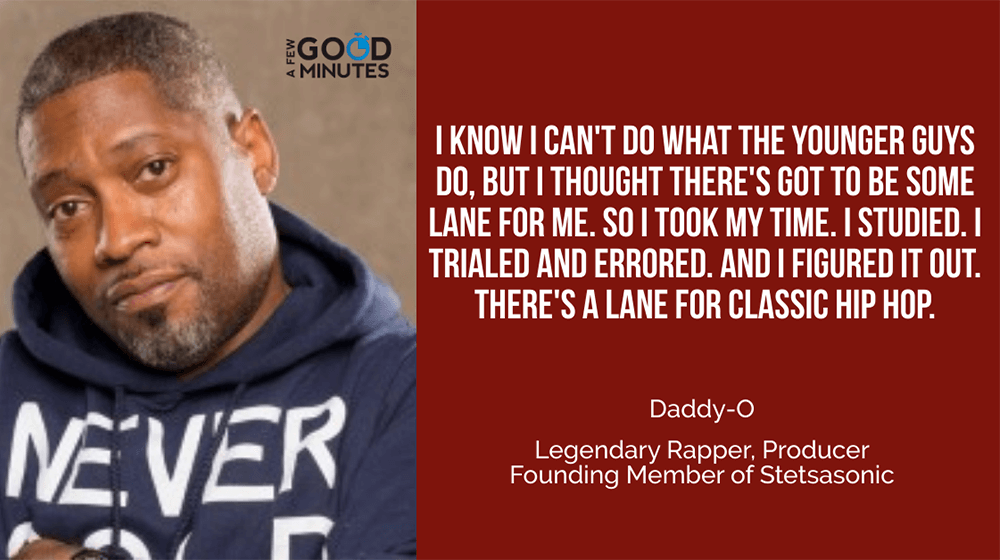 I may have mentioned before that I was a college DJ during the time when hip-hop music came of age.  And one of my favorite songs of the era was Sally, by the legendary hip-hop group Stetsasonic.  And years after my college DJ years (but I’m still a DJ…virtually at least) I had the opportunity to moderate a tech panel at Georgia Tech, and one of the panelists was Glenn Bolton, aka Daddy-O… co-founder of Stetsasonic.

It was great hearing Daddy-O talk about technology and his experiences in business and the impact modern tech has had on the creation process.  But at the time he hadn’t picked up the mic in a while.  But a few years ago I started seeing videos of Daddy-O rapping again.  And then I was on LinkedIn one morning and saw that he posted a sneak peek clip of Daddy-O and the whole Stetsasonic crew teasing a new song.  The fact that they hadn’t made an album/DVD is about 30 years but still sounding great really stopped me in my tracks.  And the fact that I saw this first on LinkedIn – and not YouTube – really stood out to me… that is after I came down from the excitement of seeing them all back together sounding and looking great after all these years!

In it was perfect timing as I had been catching up via DMs with Daddy-O and just had scheduled a time for a LinkedIn Live convo.  So below is an edited transcript of a portion of our conv where we talk about the early days of the band, why they got back in the studio together after all these years, and how he feels he’s better now than he was back in the heyday.   This was an extended conversation which you can here by clicking on the embedded SoundCloud player.

Brent Leary:  I just thought it was really cool that you dropped the little sneak peek on LinkedIn.

Daddy-O:  I did put it out on Instagram as well. What happened with me in LinkedIn was I always used to use LinkedIn just for professional stuff. I got a little tech company on the side and we train doctors and stuff and technology and I was just doing that. But a lot of people who like what we do are sitting there on LinkedIn and I don’t have to feel bad about it. I don’t have to feel bad about my physical job resume being on LinkedIn. And my music is still me. So …

Brent Leary:  I heard you say you’re a better rapper now than you’ve ever been.

Daddy-O:  I totally know I am. In 2016 I started making these records again, you know, physically making records again. And then when I did that, like I tell everybody,  the two people that I thought about was Miles Davis and and Jimmy Hendrix. And I just thought if Miles was here, would he tell somebody, man, just go, listen to Bitches Brew. You’ll hear what I’m about. Or would he do something new? And the proof is the last producer that made Miles Davis worked with was Easy Moe B; a hip hop guy who produced Tupac, Biggie, all of that. So, he already was pushing the envelope forward and I feel like Jimmy would be the same way if he had lived, he would just do something. He wouldn’t say, Hey, go listen to Purple Haze.  You know, he would do something new.

So I thought about it long and hard between 2015 and 2016 and said, what am I doing? Not, not what am I doing? I think this is important. Not what am I doing to keep the lights on, but what am I doing with my talent? And I thought about it. I said, man, I don’t rap anymore. Right? If I just stopped rapping, all they gonna know me for is the old stuff. And that was way before some of the people that are big now were big. It’s going to evolve and I’m going to be stuck in a little bubble of like, I don’t know, ‘86 to like ‘91. And, and that’s not bad. Nothing is bad about that. It’s good to have classics. It’s great to, to be an artist and know that there’s at least one classic song that people love. That’s a great, great, great feeling. But as a rapper, I’m like, I’m going to get pushed to the back of the bus, you know, to be like the old man and the geriatric bus. And I didn’t want to be that. I just didn’t want to be that. I know I can’t do what Young Thug does. I know I can’t do what Rick Ross does, the younger guys they’re going to do what they do, but I thought there’s gotta be some line for me. There’s gotta be some opening for me. And so I took  my time and I just studied it and I trialed and errored. I figured it out. And I know that there’s a lane for classic hip hop.

Daddy-O:  When I was ready, I presented it to Stetsasonic and was just like, look, man, this is a road that we could take, you know? And I’m glad I’m, I’m real proud of the guys. They picked up the mantle. They were like, “all right, we will see where you’re going with it. Show us what you want to do”. I showed them. And what they were writing right now is crazy, man. I heard The Light just kicked something to me the other day. He wants to do an interpretation of the Gamble and Huff – OJays Message in the Music. It was crazy. Like this is great.

Brent Leary:  Let’s say you’re talking to one of the old school folks who do want to get back into it. What is the hardest part? Is it getting back into the production aspects of putting a song together? Is it going through what you might need to, to build an audience and using these social tools to promote the brand?

Daddy-O:  The first step I really feel solidly is acceptance because what I found with my peers sadly, but true, is they don’t really accept the art form today. There is some validity to that, right? One of my best friends always says they shouldn’t even call what they’re doing now, hip hop, they should call it something else.

Brent Leary:  That’s kind of like the traditional “get off my lawn, It’s not as good as when I did it back in my yea”.  There is some validity.  There seems to be a certain particular sound that has taken over hip, right? And there’s not as much creativity today.

I think that the first step is acceptance. And what I mean by that is accepting that they are who they are and they can do what they do. Right. Then you figure out who you are. And that’s the hard part. Where is Daddy-O know pertinent to the conversation? Where does Stetsasonic fit in?

Daddy-O: One of the things I will say, that’s kind of weird. It’s just a freaky turn of events most. I don’t call myself old-school because I, I came after Grandmaster Flash and them, who I was with the other day, too.  Most old-school cats make more on stage now than we ever did. So, weird turn of events. It’s like, we make more onstage now than we did in our heyday because of this uber demand for classic hip hop and, and nostalgia and all of that.

I’ve been trying to convince my peers to make records, but now things are opening up again, pre COVID and now post COVID, a lot of them make more money now than they made in the past.  Maybe not on sales and particularly there’s still royalties there, but they go out on the road and they make a whole lot of money. So, so success kind of looks a little different to everybody because for them, success is just having a good tour and going out on a few days, some guys are going out only on the weekends, Thursday, Friday, Saturday, or Friday, Saturday, Sunday, making anywhere between four and 10 grand a night that ain’t nothing to shake a stick at. That’s sweet. And most of them are making $7,500 to $14,000 a night.

Success for me right now is exactly what happened to you this morning. I don’t care if it was two people, which is way more than two, but I don’t care if it’s two people when they either got up or they saw it late last night when I posted it, they looked at it and they said, man, that’s my guy. That’s my guy. And these are guys that haven’t made a record in over 30 years.

Brent Leary:  Do you think that because of the ease of production that instead of focusing their efforts on the craft of creating music, they’re almost focused on the craft of branding and promotion?

Daddy-O:  That’s absolutely true. What you’re talking about is what I described as the making of a masterpiece, right? So, you know, you look at Dr. Dre’s Chronic, or you look at Public Enemy, It Takes a Nation of Millions to Hold Us Back, or you look at Stetsasonic In Full Gear. This was all a making of a masterpiece, right? So it’s all trial-and-error, figuring out sounds getting in features, even if you get in features how you fit those features in; we’re recording on two inch tape. So that’s a whole other thing, right? Recording on two inch tape versus this digital recording that we do now in DAW is a totally different thing. So that being almost extinct, it does make people concentrate more on brand.

Daddy-O:  I just think sonically, it culminated everything. I think ‘86 was great. That’s where we saw the introduction to Salt-N-Pepa and a few other people. And then ‘87 was almost the year, Eric B and Rakim. But by the time ‘88 came, we had all come to the conclusion of knowing how to make records. If you think about it, Public Enemy had a first album and Yo Bum Rush the Show, and I’ll just use us too. Stetsasonic had a first album On Fire, great records. And for some purists, those are the best records in the world. They still take those records over anything else we made, but by the time ‘88 came around, we understood more things about the studio. We had been on the road, at least for a trial run for us and Public Enemy was more than a trial run cause LL cool J took us out.

So we went on the Def jam tour. We just learned and got our footing in the music business; what we were going to be as recording artists. So by the time we all came around, most of us had made those sophomore records. Those records were perfect because sonically, we knew where it was at. And I don’t know if any year could even compete with the Sonics of ‘88 because, let’s face it Puffy with Bad Boy makes good records. But for the most part they are loud, right? So they might not be as good as they are loud because by that time they figured out how to turn volume up in the mastering studio. But as good as those Biggie records sound, if you put it up against a Public Enemy track, it’s not going to fair off sonically. The Public Enemy track is still going to eat it because we got our groove then.

This is part of the One-on-One Interview series with thought leaders. The transcript has been edited for publication. If it’s an audio or video interview, click on the embedded player above, or subscribe via iTunes or via Stitcher.