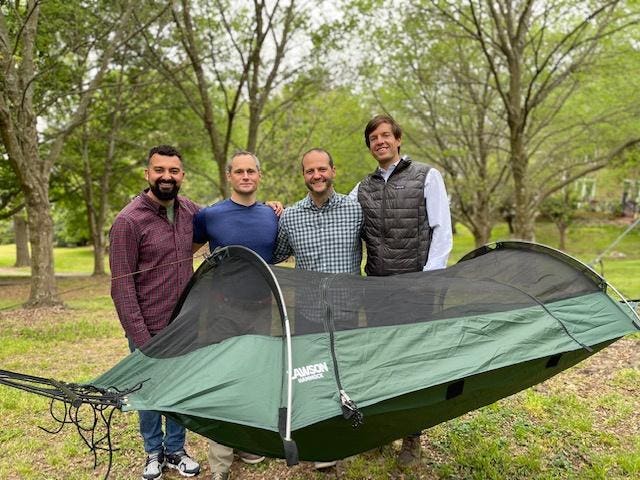 Wes Johnson, 47, started his business Lawson Hammock in Raleigh, N.C. in 2005 when he was working in home construction and looking for a side hustle. As a camper, he knew that many fellow outdoor enthusiasts were trading their sleeping bags for rugged outdoor hammocks—but that many didn’t offer much comfort. If he could invent one, he imagined there would be a market for it.

Johnson kept his eye out for opportunities to start the business. When he met two brothers who were selling hand-sewn hammocks at outdoor festivals, he offered to buy their inventory with a $30,000 loan he secured from a friend. Selling their wares through Lawson Hammock—the brothers’ last name is Lawson—he built a thriving business and began working on creating a prototype for his ideal sleep hammock.  To make the hammocks, he turned a local cut-and-sew facility.

Then he put up a simple e-commerce site and began marketing them while continuing to refine his designs. By the end of year one, he had brought in $10,000 in annual revenue, selling the hammocks at $139. There was one problem: It took forever to make the hammocks. Johnson found it so arduous he thought about closing the store.

He stuck with it and started pitching his hammock to retailers who might sell it for him. Once he signed on his first retailer, which had nine stores, he began hunting for a manufacturer who could help him improve his processes. When he found one that makes tents for large outdoor companies in the U.S., he asked the firm to create a prototype for the hammocks, which can be used as tents. He outsourced warehousing and shipping to overseas partners, which saved him time.

By 2006, revenue hit the $20,000 to $30,000 range. When the Great Recession arrived in 2008, Johnson saw a chance to expand, as people turned to camping and other low-cost vacations. He began devoting more time to the business and in 2010, left the real estate field.

Confident his design was up to snuff, Johnson began pitching magazines about his products and got covered in Backpacker and Outside magazines. These efforts fueled growth, and by 2015, Johnson hit $500,000 in revenue. To keep his budget lean, Johnson set up shop in a coworking space in Raleigh. He invested in getting a patent for the Blue Ridge Camping Hammock, to protect his idea.

As the brand’s profile grew, Johnson concluded it would be hard to bring the brand to its full potential on his own. “I knew there was more potential to scale, but to scale I needed help,” he says. “I needed help on the funding side to ramp up marketing and to add new products. It’s not cheap.”

After talking with private investors known as angels, he decided it would be best to find partners who had experience in the type of consumer goods he was selling. Johnson met the right partners when he had coffee with a local entrepreneur, Mark Saad, who started a company called Sherpa Collaborative, which invests in startups and provides help with sourcing, operations, pricing, brand strategy and other services. “They now manage the daily operations,” he says. This allowed Johnson to step back and focus his energy more on growth strategies and product development—as well as to return to the commercial real estate world, which he missed. He is now an associate principal at Capital Associates, a full-service commercial real estate firm.

For Johnson, now the father of an infant and toddler, the arrangement with Sherpa Collective is ideal. Although Sherpa Collective purchased the majority of the company, Johnson still has a substantial equity stake. “There’s still upside for me,” he says.