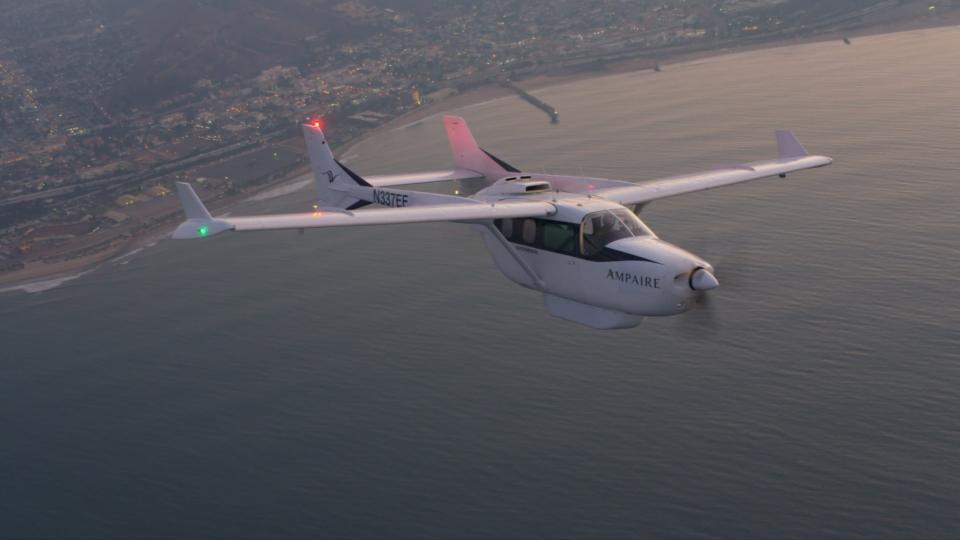 Ampaire has been test flying its hybrid electric powertrain in a Cessna 337 Skymaster, a unique … [+] twin-engine airplane with a “push-pull” configuration.

Among the welter of electric aircraft startups aiming to change how we get around in the air, Ampaire has stood out for a seemingly near-term practical approach, working to develop a hybrid electric propulsion system that could be dropped into small turboprop planes to replace their internal combustion engines. Now it’s being acquired by one of the small regional airlines that is among its target customers: California’s Surf Air Mobility.

It’s an ambitious move by Surf Air CEO and owner Sudhin Shahani, who has been working since 2014 to gain traction with a Netflix-style subscription service that allows customers to fly as much as they’d like for a monthly fee on small planes from private airports in California and Texas. His bet is that making those planes hybrid will drive down costs to the point where they’ll be a more price-competitive option to driving or flying on commercial airliners for trips between 50 and 500 miles, and enable a broad expansion of routes and frequencies.

“We think that together we can drive the adoption of hybrid electric aircraft as a mass solution at scale,” says Shahani.

Surf Air is paying roughly $100 million in its own stock to take a 100% stake in Ampaire. It’s currency based on Surf’s plans to go public later this year. Shahani, 38, has yet to clarify whether Surf Air will undertake a reverse merger with a special acquisition company, a direct listing or a traditional IPO, but the company lined up $200 million in funding in August from Luxembourg-based Global Emerging Markets Group contingent on going public.

Ampaire CEO and cofounder Kevin Noertker says his initial series hybrid electric system will cut fuel and maintenance costs by 25% to 30% for small workhorse airplanes like the Cessna Caravan and DHC Twin Otter that seat between nine and 19 passengers, with no loss in range compared to conventional versions. He’s targeting winning a supplemental type certificate from the FAA in 2023 for the first aircraft model that they’ll aim to convert, with passenger service commencing in 2024.

The price to retrofit a plane with Ampaire’s hybrid powertrain will be equivalent to what owners already spend to overhaul a turboprop engine, which is generally done every three to five years, says Shahani.

Noertker says the deal was driven by his and Shahani’s shared vision of what it will take to make hybrid aviation scale.

That a customer is acquiring Ampaire, and with stock, raises questions to Richard Aboulafia, an aerospace analyst with Teal Group.

Vertical integration for Surf Air also raises questions about whether it will be able to handle the capital costs of both developing Ampaire’s technology and building out its air travel network.

Noertker says it will cost roughly $50 million to get Ampaire’s first hybrid system through FAA certification, but that developing versions for subsequent aircraft will cost less.

Shahani has tried a number of different approaches with Surf Air, including a short-lived European expansion, and in 2020 he bought BlackBird, an app-based marketplace on which private plane owners can charter out their aircraft, allowing Surf Air to expand to on-demand flights to supplement the scheduled service it’s offered with its fleet of 10 Pilatus PC-12 planes, as well as operators it’s subcontracted with.

There are currently roughly 2,000 planes available on its on-demand platform – Shahani envisions incentivizing their owners to go hybrid, as well as making Ampaire’s technology available more broadly, both for retrofit and in new aircraft.

While Surf Air says it’s moved past a rough patch in 2018 where the IRS slapped it with liens for $2.3 million for unpaid taxes and a former operator of the company’s planes sued it for $3.1 million for unpaid bills, it has yet to hit profitability.

Shahani says the company has “profitable unit economics on all our routes,” but remains in the red because of investment in growth. He says Surf Air’s subscriber model has helped it hold up better than conventional airlines amid the drop in travel amid the pandemic —  customers have continued to use Surf to fly to vacation homes, if less frequently, while traveling through smaller, less crowded airports has gained appeal.

Whether hybrid aircraft will enable a boom in regional air travel is up for debate. While a 25% to 30% reduction in fuel and maintenance costs would be significant (and Noertker says 40% to 50% may be achievable with plug-in versions of Ampaire technology down the line), that’s just one part of the cost puzzle for airlines, which have high fixed costs in payroll, infrastructure and aircraft. Labor accounted for 32.3% of U.S. airlines’ operating costs in 2019, the largest single component, according to Airlines for America, followed by fuel at 17.7%.

Having good scheduling software to make sure Surf Air’s planes are full may be more important with an on-demand model, and avoiding the dreaded empty “deadhead” flight to move a plane into position to pick up customers, says Aboulafia.